Ideas that inspire: 100 Years After the Riotous Rite of Spring

If you know the Disney movie Fantasia you know the music. It’s the one with the scary dinosaurs. This music may well be imprinted into my lizard brain. As kids we’d dance to it in our little rented stucco home in Evanston, Illinios. For us it was a story of the chase—of calm and chaos.

If you like percussive, crazy and aggressive music you might want to give it a try. It was one of Frank Zappa’s favorites. Beware, it’s not a crooner. It’s the musical and dance performance that created a riot in Paris in 1913 on May 29.  And your kids may love it.

One year ago today I celebrated it’s 100th anniversary with a series on my Facebook page. The music sounds challenging 100 years later and I wondered, “How crazy would it have sounded in 1913? What was it like in Paris back then?” The city was growing into a metropolis, automobiles and aeroplanes were brand new, and movies were still silent. In one year Europe would be engaged in the most terrible war the world had ever seen.

Here’s what my Facebook looked like a year ago. Don’t miss the 1910 French post cards of the future. Sorry, some links may no longer be available as happens on the internets. 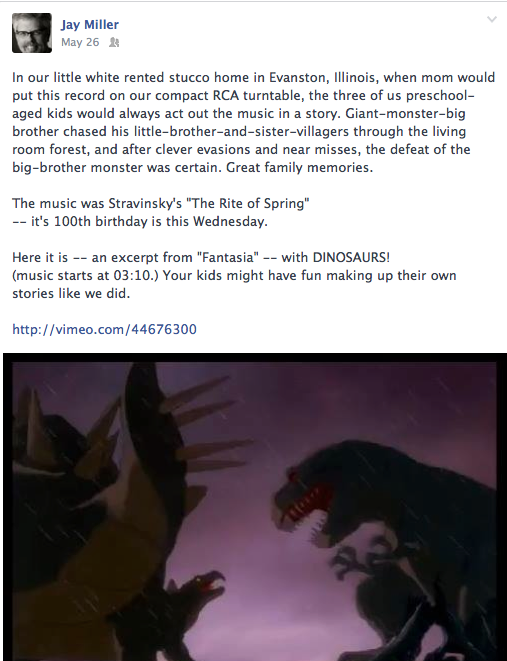 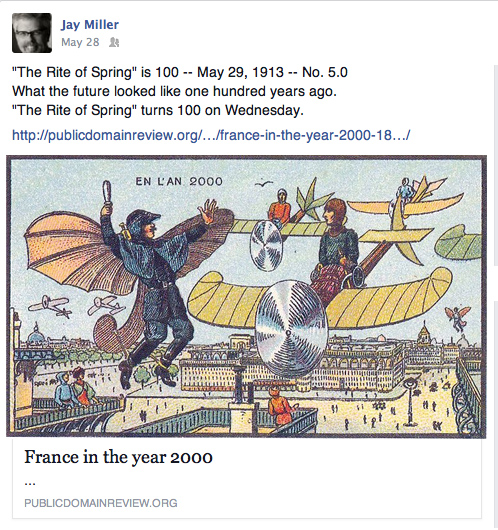 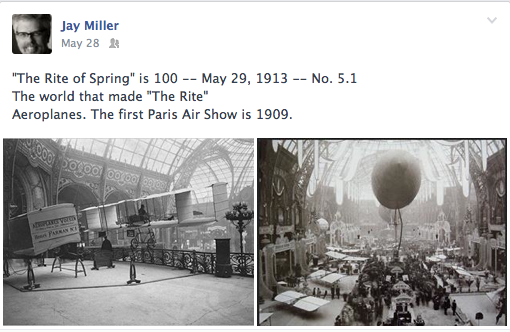 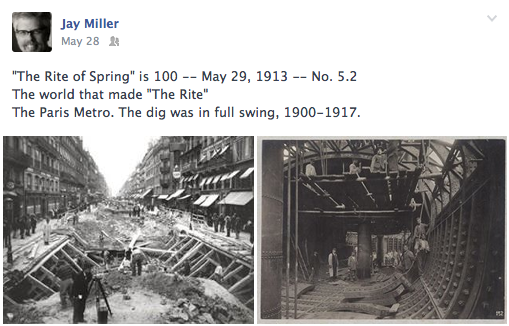 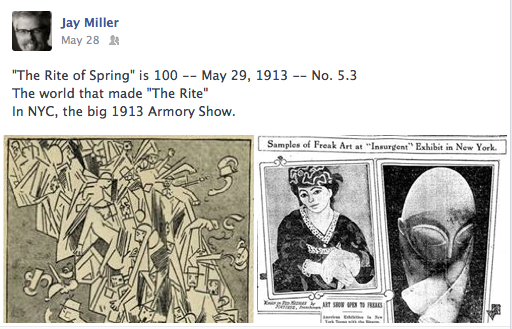 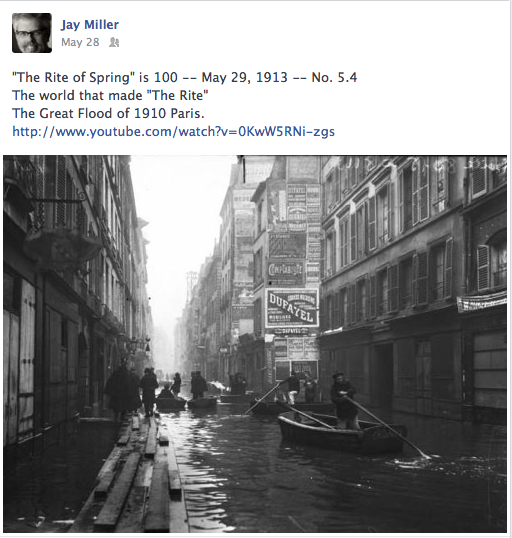 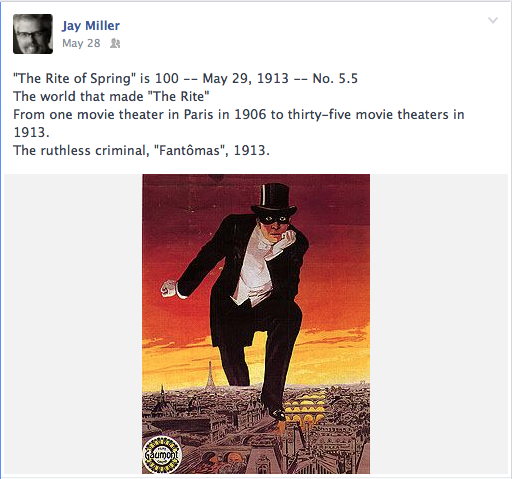 “There is nothing in this involved, compact, and concentrated film but explosive genius.”
Update: As of March 2015, the 1913 silent film Fantômas is streaming on Netfllix.
It’s a nice print and score, though so naive that few of us would find the plot surprising. 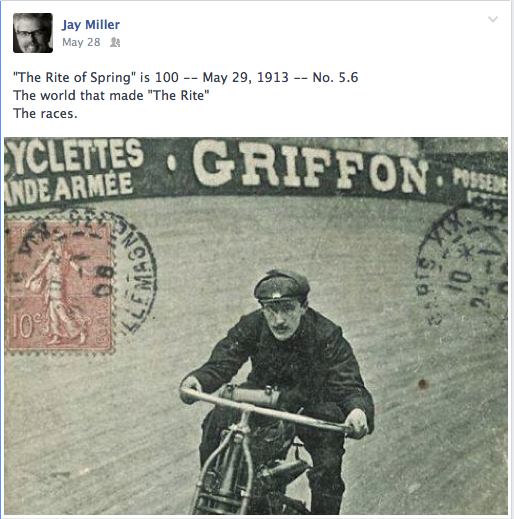 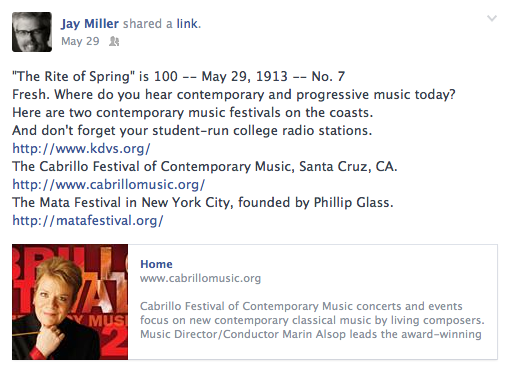 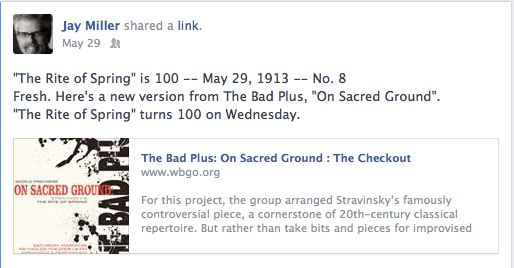 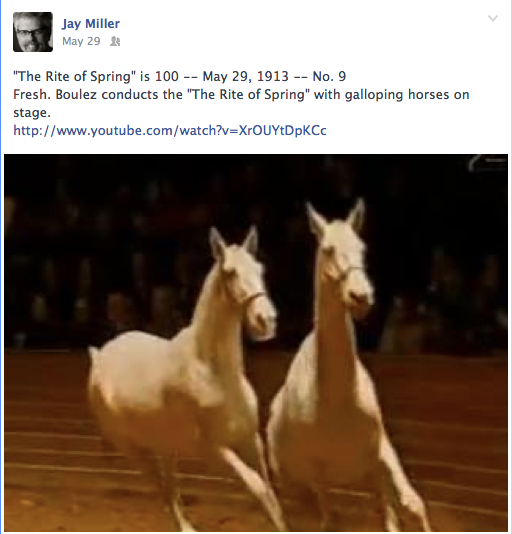 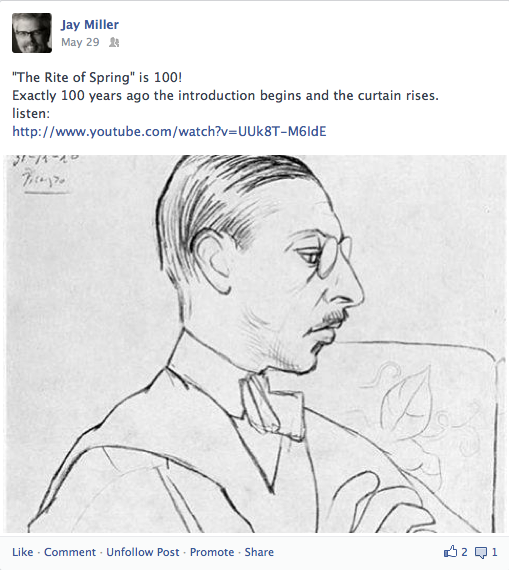 My Epilogue:
“I have paris live streaming on Arte right now!” I posted.
I had found as an exact a recreation as possible streaming live on ARTE, France, of the musical performance, the costumes and Nijinski’s choreography—at the exact same hour, on the exact same stage, exactly 100 years later (you can see a clip of it here)—Le Centenaire du Sacre du Printemps at the Théâtre des Champs-Élysées, Paris, performed by the Mariinsky Russian ballet, and conducted by Russian director Valery Gergiev.